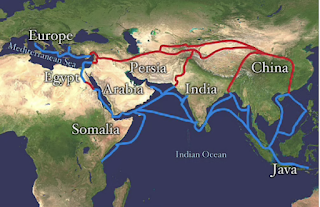 The Silk Roads became the tangible metaphorical synonym for the continuous journey that we all forced to continue living under it's umbrella for centuries past, under the pressure of so many circumstances that control every aspect of our life, and shape who we are now and then.
Silk roads started way back in the second century in China and the term silk roads used for the network roads created by rulers and warriors for the traders to exchange goods and ideas between the world diverse cultures, and to get to my point I have to explain more, so please bear with me.
In order to understand the concept of silk roads, I have to highlight the important facts that have the impact in making and changing the map of the silk roads over decades of operation either by land or by sea.
Natural recourses play an important role in determining the geographical map of moving the trade routs according to the global legal agreements and I meant to mention the law here because we need to conserve these recourses from looting and illicit agreements through the black market. Furthermore, these recourses controlled by political and economical power to help discovering, extracting and then preparing these recourses to making their own way to the interior and external markets.
Human recourse, we can't only talk about the pioneers in the world of knowledge and the educational revolutions that focus in developing the quality of human mentally and physically because we need every person in this world to build it and this could create a trade method base on social division of human energies accompany by other considerations related to social and cultural level, therefore this has negative impact on countries with social and cultural backwardness.
Slavery phenomenon took so many shapes and ways since it started until now, it was completely base on that division and regardless to whom was controlling the power of moving the human trading between east and west, more important as I'm talking about the silk roads we have to focus on the result of this phenomenon in moving working hands, spreading ideas, trading handcrafts and above all as a consequence of coexistence with the environment; I have to mention grafting to create and produce new gene generations with different mental and physical nature, so definitely these changing should effect the cycle of the trade routs either by opening a new venues or by closing some others.
Technological developments and this fact has a long history of the world of inventions starting from inventing a paper and a pen to reaching out the moon. The silk roads have been rotated in many directions through the centuries because of these inventions, because simply people moves looking for a better and easier life some looking for luxury and more developed places following the highest technological lifestyle and trying to participate and be part of this developments. some others living basic lifestyle, still they have to plant and make their own food and invent their devices to make their life easier and this kind of living can attract a certain group of people who has the experiences to coexist with primitive daily problems.
Political and economic challenges, have big impact in determining the path of the silk roads. areas with political power and high economic profiles have opened market allowing for more trading opportunities and attracting more recourses from and to the rest of the world. Leaders in the world of economy and politic aware of their power to dominate the international market and determine the marketing areas and the trading points. this reality has been in constant change since life began on this earth, through the establishment of empires to kingdoms and the division of small areas.
We should not ignore talking about humanitarian revolution as result of dominance and monopoly of the strongest and this is a natural reaction as a human and history have witnessed so many kinds of resistance against the roles or against oppression or even against any changing in their living. However this fact is very important in changing the map of the silk roads following the changing in the hierarchy of political and economic forces.
The conclusion should be the guide to us to understand what is going on now because we are living the pandemic era a choking reality that makes the world swing in all directions to deal with this tragedy and find loopholes to call it off. The silk roads map has been changed, roads blocked to stop the spread of this disease and the increase of deaths and damages . New roads have opened to take over and make a revolutionary new era where everything has a new language needs to be perceived with a new vision.
The silk roads in the update status, it’s still uploading and we don’t know what’s in it for us!
Posted by Eiman Muiny at Friday, January 07, 2022

artwork of the month